Ok, so I’m back from my first local Steel Challenge match with the Tactical Solutions AR-22 upper, and I have to say that I’m thoroughly happy with the thing.  The gun ran with zero malfunctions.  I shot the match with Federal .22 bulk pack ammo, the sort that is available at Walmart.  It also ran with a couple of magazines of Winchester Super X, and the handful of ancient Wildcat .22 LR ammo that was kicking around in the bottom of my range bag.

Since I’ve got four magazines, I pretty much shot the entire match using one magazine per stage.  (We run each stage three times, so given the average number of targets one magazine allows plenty of ammo per stage, even assuming a couple of misses.)

One of the other shooters brought out a suppressor, an AAC Pilot, and it screwed right on and ran with no problems.  The only downside I found was that the thread protector could come loose after heavy shooting.  That could be alleviated with a bit of locktite, I’m sure. 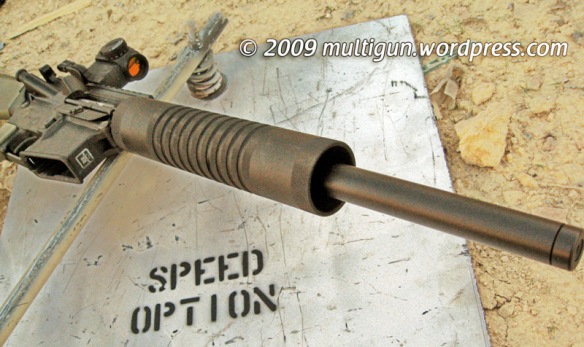 Tactical Solutions AR-22 and Steel Challenge. Like chocolate and peanut butter, they just go together.

Also, in my previous post I noted that the AR-22 upper didn’t fit onto all of my lowers.  A fellow shooter put a call in to Tactical Solutions (thanks to rtr over at the Colorado AR-15 board) and was told that if the upper didn’t fit, that the solution is to use a judicious amount of gun oil and some pressure.

Between some grease, an AR-15 pin punch, and a few light taps with a hammer, I was able to mount the TacSol upper to a Rock River lower.

I’ve got some videos from the match, and will be uploading those hopefully by the end of the week, as well as some ideas about a new kind of match with the tactical-ish rimfire guns that seem to really be hitting the market now.