So, recently over at The High Road, this dicussion popped up, talking about the development of a product that will automatically eject the magazine from an AR15 upon being emptied.

Now, generally speaking, when running a COF, it’s rare to actually run a gun dry. Going to slide/bolt lock wastes time, because it adds extra required movements to your reloading process. If you don’t run a rifle dry, all you do is hit the mag release, slap in a new magazine and continue shooting.

In the event that you do run a rifle dry, you have to dump the empty magazine, slap in a fresh one, and hit the bolt release. So there’s at least one extra movement to the whole process, and that adds time.

That said, the idea of automatically ejecting empty magazines seems like a decent idea on the face of it, but I’d be curious to know if there would be any drawbacks to something like this.

For those of you who have come to the online gun culture since 2006, you may not have ever heard of John Melvin Davis, aka Gunkid, Hardin, and any of hundreds of other aliases. There’s a very good reason for this.

Since 2006, he’s been spending his time being supervised at taxpayer expense in a federal penitentiary after getting busted for having guns in his possession. (He’s been previously convicted for theft, drug dealing, and trying to make suppressors without having filed the correct paperwork to do so.)

However, all of this really pales in comparison to his worst crime.

By no means is he the smartest. Nor is he the most technically proficient. Nor was he generally grounded in anything resembling reality.

But there are two things that he actually was:
He was the most prolific internet troll I’ve ever encountered. He applied a work ethic to trolling that, had he put a similar level of effort into holding down a job, he’d no doubt be making a six figure income. He was also unintentionally hilarious. If you’ve ever seen someone on a gun-related forum make a joke about bugging out with a tactical wheelbarrow, using a barkless Chihuahua as a guard dog, resorting to cannibalism after the fall of western civilization* or touting the .22 LR as the best 300 yard cartridge for The End of the World as We Know It, those were all concepts invented by Davis.

Here’s the thing though.

Davis was completely dead serious when he wrote these things. And he was banned from at least a dozen forums hundreds of times over the course of a few years.

After serving his sentence, he was released on October 26th of this year. Be sure to keep an eye peeled for his brand of stupidity. Undoubtedly he’ll be coming to an internet gun forum you like sometime in the near future.

To Gunkid, welcome back. Your special brand of crazy sauce has been, well, not missed at all, come to think of it.

*I’m thoroughly unsurprised that a guy who was incapable of grasping the rudimentary machining skills to mill the frame of a pistol would believe that societal collapse was going to happen any minute now and that within a week we’d all be gnawing on each other’s femurs.

Once a month, a local dude ranch, The M Lazy C holds a multigun match.  It’s a fun place.  The range is usually used for local Cowboy Action matches, and has been built up to be reminiscent of the old west.  The stages are generally pretty short range, so opportunities to work on target transitions and speed shooting abound.  Lots of steel targets make for quick stage set up and a high level of satisfaction. 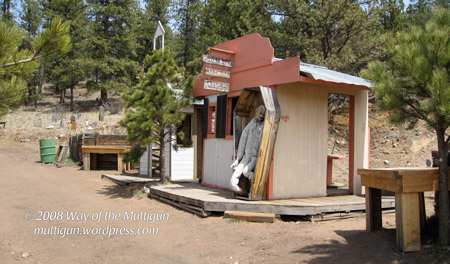 All of the stages require the use of all three weapons; pistol, rifle, and shotgun and many of the stages have a unique flavor, often at least one of them will require engaging targets, and then moving to another range to continue the stage.

Since the stages are generally fairly short-range, with the long shots being maybe 70ish yards, this is a fantastic match to work on speed shooting as well as rifle skills with non-magnified optics.  The rifle I’m using is a fairly standard Rock River entry carbine with an AimPoint T1 on top.  In the video, it’s hard to see, but one of the steel targets was a flipper that tosses a clay pigeon into the air when it falls. 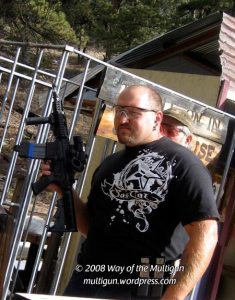 A competitor gets his game face on for the first stage. Note SBR.

Another Competitor with an SBR on the second stage.

Due to the short-range nature of this match, more than one competitor broke out their SBR’s.  These rifles handle very well with some of the close quarters of the matches, and the short-range nature of the target setup doesn’t adversly affect these shooters’ ability to hit the targets quickly and accurately.  Note that all NFA rules apply, and that to own these firearms requires jumping through additional legal hoops.

Stage 2 involved a sitting start, drawing a pistol and engaging targets before hot-holstering, moving across the range setup and engaging further steel targets with rifle and shotgun.

One note regarding the practice of “hot holstering” or putting a loaded, just fired handgun back into your holster while on the clock; you must be absolutely meticulous about indexing your trigger finger along the side of the weapon, re-engaging the mechanical safety (if applicable) and putting the weapon back into your holster without covering the RO or yourself with the muzzle of a loaded weapon.  When you’re shooting under time constraints, it can be extremely easy to screw up the order in which you commit an action, so if re-holstering under such circumstances isn’t something you’ve done regularly be sure to exercise extreme caution and step through the process with deliberation.  At worst, it will cost you a couple of extra seconds, which is far, far better than a trip to the emergency room.

Ok, on this stage, I made several mistakes.  The first of which was starting with a pistol that only had four rounds in it.  This forced me to execute an unnecessary reload, which cost time on the clock.  I also have a bad habit of leaning or stepping through doors and ports, which probably added another couple of seconds.  I also missed once with the shotgun, which meant stuffing an extra shell in the gun during the reload.  Despite that, the stage was still a lot of fun.

Stage 3 was a quick blaster of a stage that was pretty easy to clear.  Pistol and shotgun only.

The only tricky portion on this stage was engaging a moving buffalo-shaped steel target with the shotgun.  Fun stuff, but not as fun as what came next.

For the longest time, I’ve harbored a secret fantasy of shooting a match styled after a George Romero zombie movie.  Lots of targets, and only “head shots” counting.  Admittedly, that might be a little bit grim, but chalk it up to a love of B-grade horror flicks, too many late-night conversations revolving around horror movie protagonists who constantly make poor decisions, and a somewhat twisted sense of humor. 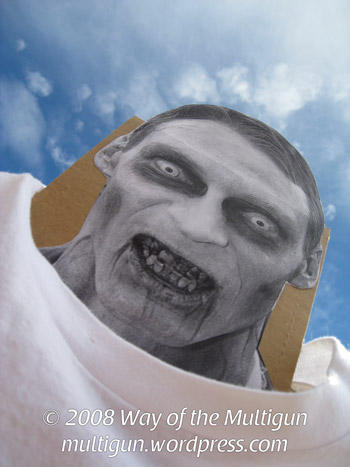 Evidently the match director is a mind reader, and the second half of Stage 4 had a bunch of Zeds.  Being a nice guy, he even added some pretty excellent target embellishments.

The overall setup was quite good.  Engage pistol steel, holster, move to the shotgun, engage shotgun targets, ground shotgun and then move to the final portion of the stage with the Zed targets where there was a mandatory rifle reload thrown in.  You can see a bit of indecisiveness on my part when shooting that portion of the stage and that cost me in the end.  The lesson?  Have a plan, visualize it before shooting the stage, and once the buzzer goes off stick to the frickin’ plan.

Well, that’s pretty much it for this match review.  I’ll have another one for a local bolt gun match up soon!

This weekend’s been packed full of all sorts of shooty goodness. Saturday was a close-range hose-fest of a 3 gun match followed by a birthday party where I bid adieu to my 20’s. Sunday was a tactical rifle match with shots between 200-400 yards.  Keep your eyes peeled for pics, vids, and writeups later this week.

In the meantime,  I’m frickin’ dead.

Received a card in the mail telling me that I’m now a C-Class Production shooter.  Hopefully that’ll jump up a rank or so with the next couple of classifiers.

Looking at the stats, I biffed one particular classifier where my percentage was about 22%.  That explains it.

Ok, here’s the review of the Prairie Dog match I promised a few days ago.  This is a home-grown precision rifle match that involves shooting at small steel targets at distances between 200-400 yards.  The game is open to any rifle, but those who did well were running purpose-built precision bolt guns.  The course of fire consists of ten targets set out in the field.

The Course of Fire. The targets themselves are too small to see from the firing line.

Below is an example of a target/indicator combination taken through the lens of the spotting scope:

The first target. You can see the prairie dog target to the right.

Here’s how the match works: the shooters form a relay on the firing line.  There are three staff members, one with a timer, one manning the spotting scope, and one recording the scores.  Once everyone is situated, the RO with the shot timer stands to one side of the first competitor.  When that competitor is ready, the RO sounds the timer giving the shooter fifteen seconds to fire one shot at the target.  A hit registered in the first ten seconds results is ten points, between ten and fifteen seconds a hit is five points, and a miss is simply scored as a zero.  After the first competitor has fired or his time has expired, the RO moves to the next shooter and repeats the process.  Once all competitors have had a chance to fire at the first target, they start over again at the second target, repeating the process until each shooter has fired at all ten targets.  After that, the process starts again until each competitor has shot the course of fire four times for a grand total of forty shots.  The best possible score would be 400/400 points. 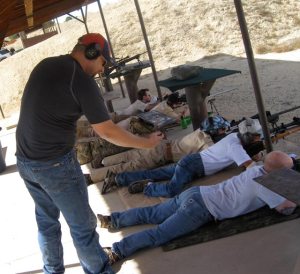 The Range Officer with the shot timer.

The person manning the spotting scope registers whether the shot was a hit or a miss, and then the score is recorded by the guy with the clipboard (yours truly, in this case.)

Most of the competitors were shooting bolt-action rifles chambered in .260 Remington, .308, or .223.  A couple of AR-15’s were also on the line as well.  The Match Director was kind enough to let me shoot his rifle for this match, a custom-built bolt gun in .22 BR built on a Stiller action.  I’m thinking that the gear probably gave me a bit of an advantage.

A custom .22 BR rifle built on a Stiller Action. The host of the match was kind enough to let me shoot this gun.

A single round of .22 BR. The cartridge shoots very well, and as long as you’re aware of the wind. It is more than accurate enough for this sort of match.

So, my final score was 305/400 which put me in 4th place out of 16 competitors.  The winning score was 360/400.  I’ll definitely be shooting this match in the future.  Stuff like this has gotten the gears turning for a precision bolt gun of my own.